This is my last piece for CAPITAL LETTERS. I have thoroughly enjoyed this experience.

I met with a very interesting Canberra based author, Mark Henshaw, for a coffee and a chat. He has recently published his second book, The Snow Kimono, and taken on the new role as Creative Producer for Literature at Gorman Arts Centre.

The influence of living in other countries on his writing 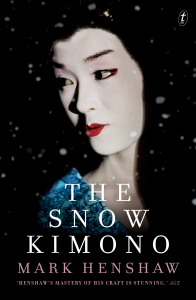 Mark has lived in a number of different countries throughout the years, which included studying in Germany at Heidlberg University. As The Snow Kimono is set in a few countries, I asked Mark if his previous travel experiences have impacted on his writing. His response was to state that ‘it was the other way around.’

He is a curious person, a key element to being a writer. He believes that his curiosity and the Australian habit of looking out into the world influenced his decision to travel in the first place…